I’m passionate about missions. As one of the leaders at ‘The Soup Kitchen Missions International’; an organisation whose mandate is to to spread the fragrance of the knowledge of Christ in every place, I often have the opportunity to visit those who need to hear the good news about Jesus Christ.
Yesterday, our team visited one of the prisons in Oyo State, Nigeria and here is a compilation of our experience.

We arrived a few minutes before 12pm. Eight of us walked to the entrance of the prison where we dropped the gifts we had brought, a 3.5kva generator, clothes and books made possible by the kind donations of our friends. A few months ago, we could not afford to buy the generator they needed so direly.
The green gate was next. As we approached the now familiar gate, I remembered our last visit here eight months ago. Then, we could only see the female inmates because we were all ladies. This time, we even. We were ushered into the reception where I registered the name of our organisation and the items we had donated. We were each given a pass and led by one of the officers into the male side of the prison. I noticed men huddled together in different groups, a mosque and other buildings. One of the buildings was tagged ‘Freedom Cell’, this stood out to me.
The chapel was about 3mins walk from the entrance and we got there at 12:15pm. The inmates began to fill the hall and two of them gave the opening prayer. One spoke in English, the other interpreted to the Yoruba language. Next was the praise and worship session, led by two other men, it was an awesome time.
One of the other inmates walked up to the pulpit and introduced us to the people. He said, “These people are from The Soup Kitchen, this is the first time I have heard about the word of God being cooked in the kitchen and they have come to serve the undiluted word of God to us”. I was awestruck! This was the first time that we didn’t have to explain the meaning of our name, most people assumed that we were involved in the cooking and distribution of free food!
Seun walked up to the pulpit when it was time to give the word. He began with a short prayer and broke the ice by talking about his heritage as a complete Nigerian citizen. Then delved into the world, saying ” every man is a prisoner”. He gave his own testimony of the prisons he had been in personally and how God had set him free. His text was taken from Acts 16:25-34, the story of Paul and Silas who were prisoners at the time and how others were led into freedom because of their own faith. He laid an emphasis on the fact that they never saw themselves as prisoners because they had been set free in the way that matters the most, through their faith in Jesus. Recalling that Paul often referred to himself as a prisoner of Christ.
He spoke from Romans 7:14-24, how Paul himself struggled with sin at some point in his life. We were made to understand from Galatians 3:22 that all men are prisoners of sin and true freedom is found in Christ alone. He ended his sermon with a declaration of hope in Christ, and gave an altar call, calling men to become prisoners of Christ.
I didn’t look to see who raised their hands, but I know souls were saved. This was the pure and undiluted word of God, akin to the sermon Stephen gave in Acts 7. He ended his sermon with a short prayer. One of the inmates gave the vote of thanks and we were quickly ushered out. At the entrance of the chapel, the inmates brought handmade fans to us, so we bought a few to encourage them.
We were led back through the same path and submitted our tags at the reception. The letter of appreciation was handed over to me by the welfare officer, and after seeing the officer in charge of the prison, I was ushered out of the green gate.
I heard God say to me that, “what happened in the prison was beyond the physical”. The light of God has invaded Agodi prison because we said ‘yes’ to Jesus. We will never remain the same again, and neither will they. I look forward to more opportunities to share the good news of Christ. Glory to God forevermore!

The first time Olamide  mentioned The Soup Kitchen idea to me, I was elated and wanted to be a part of it in any way I could. So with excitement I volunteered for the Prison break 2.0.
I was glad that I would get to be part of a cause that stood for Christ and represented His love on earth. I was highly expectant. I knew that the Holy Spirit would work in us mightily and chains would be broken, the lost would be saved and the weary would find rest.
Despite not being able to witness the ministration to the inmates at the prison due to delays on the road, I was full of joy as the other volunteers testified of God’s power at work.
I was also joyful because our labour of love was not in vain and as we had watered, we also would be watered.
There was great joy in my heart as I met my new family. I am truly glad to be part of the TSK family and I look forward to more testimonies of God’s fragrance spreading through us.

It was a great privilege visiting a prison prison for the first time and being able to touch the lives of the inmates. It’s surprising and appalling how unstructured our nation is, with majority of the inmates awaiting trial. I also really got to see how different the prison community is. This really moved my heart and made me grateful to be a part of this outreach. Being able to touch the ones with very little hope of a better life, and share the hope of a full life in Christ Jesus despite their physical chains.

Much more importantly, it was a great experience doing all that with great people. Right from the trip to purchase the generator which was presented alongside other items, it has been such a good time for me. The atmosphere around the members of TSK was welcoming and open.

Even though it has not been very comfortable participating in the online prayer meetings as I am not used to them, it was still a great experience knowing hearts at different locations were lifting up praise to God and intersession for people.

I am indeed grateful for this opportunity to be a part of God’s mandate to visit the prisoners and reach the world with the gospel of Jesus Christ.

It was an awesome experience to visit the Agodi prison. When I saw the advert I was drawn to it as I had a burden to do some work for God so I was excited about the opportunity. I donated a few clothes happily. I wanted to donate financially but sadly I wasnt capable. Then I was told they needed volunteers. I happily offered to join in. I had never been to a prison before and I admit I was a bit apprehensive on getting there. What if they didn’t like us or accept message. On getting there we met the guards who were nicer than I expected. We were let in after a search. The name, ‘The Soup Kitchen’ raised so much amusement from everyone who heard it. They kept asking where is the food. Pelumi replied that The Word was the food. I was touched. On getting to the church in the prison the prisoners were so organized you could tell there was a fire burning in some of them already. They conducted the praise and worship gracefully and it was lit. One of the prison officials came to introduce us and you could tell God was there. I did not expect the words that came out of his mouth. He spoke so intelligently and introduced the Soup Kitchen with so much understanding. The foundation was set. The Word came powerfully. The minister was used by the Spirit. I was blessed and I’m sure everyone there was too.
All in all it was a successful mission. The Word was delivered. The physical side benefits were delivered. Glory be to God
Hallelujah 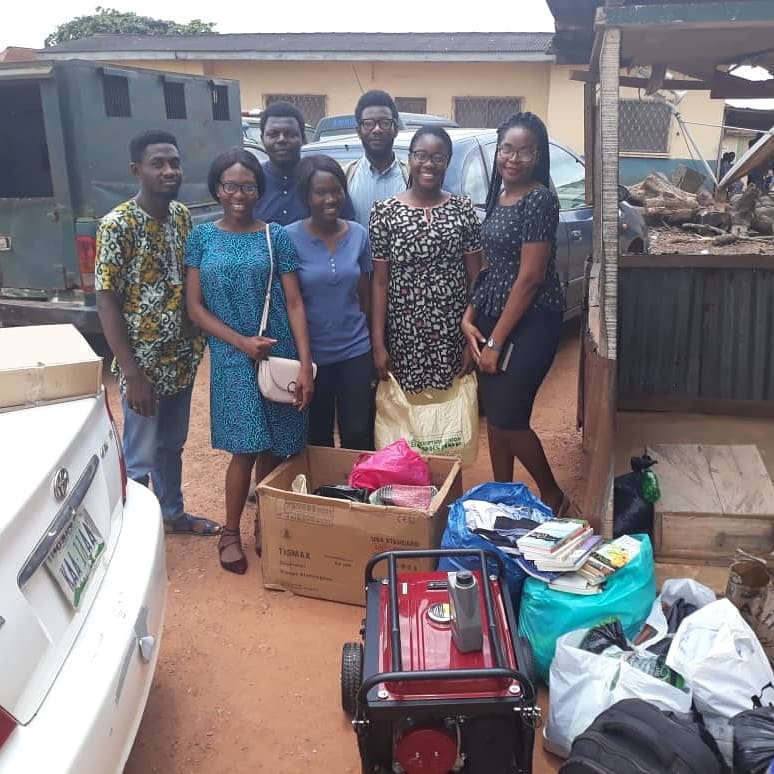